Do you feel that bite in the air?

I think it's officially fall. Bring on the pumpkin spice and Chai-flavored everything. Set aside the linen and jersey scarves - its time for the heavy crochet and knit stuff. We tried to get some wiggles out at a park today and ended up taking shelter at the library instead. Brr...

My nephew's 6th grade football game capped off the afternoon and, boy, we froze our butts off. At least they won... I think? Or maybe they lost, I don't really know. It was pretty stinking cold. 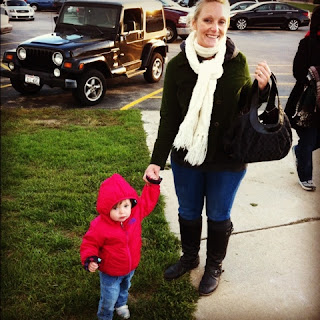 What I do know is that after the game, and after Emma was put to bed and after the dishes were washed and coffee was prepped for tomorrow morning, I opened a bottle of red wine and curled up under a cozy blanket wearing a hoody and yoga pants. That's what you do on fall nights, ya know? Watch TV and drink wine while under a blanket. 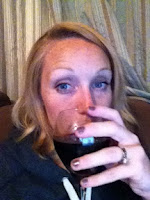 Also, dinner tomorrow night = roasted squash and perhaps something incorporating the slow cooker. Obviously. Because it's fall.
Posted by Buffy at 6:53 PM