- Up for the day at 4:30 when Moose’s snuggle buddy doll thing’s head was wedged under my back.

- While at doc for new anxiety meds, Dr. asks me what triggers anxiety attacks. EMMA’S SCHOOL CALLS RIGHT THEN. 😳

- Tommy asks me to open his apple juice. This is what makes me lose my shit and cry.

Happy Fat Tuesday, all! Time for a drink and drink.

Also, if you haven’t done so already go back to the Boob post and be sure to enter to win one of two Coobie bras I’m giving away! Woohoo!

I binged this weekend
Not like, “oh hey! I ate some junk food!”
No, I binged. I went manic. I went to full bore. And I knew that if I took a step back and drank some water, went for a walk on the treadmill downstairs, hit my kickboxing bag that I still haven’t really touched since I had to have it a few weeks ago, I’d be able to get out of that programming in my brain. I would be able to change the channel. But for some reason, I could not find the remote. I was stuck on the eating infomercial from hell and in turn I consumed behind my family’s back. I consumed in front of my family. I consumed in front of my friends. I consumed when my friends weren’t looking. 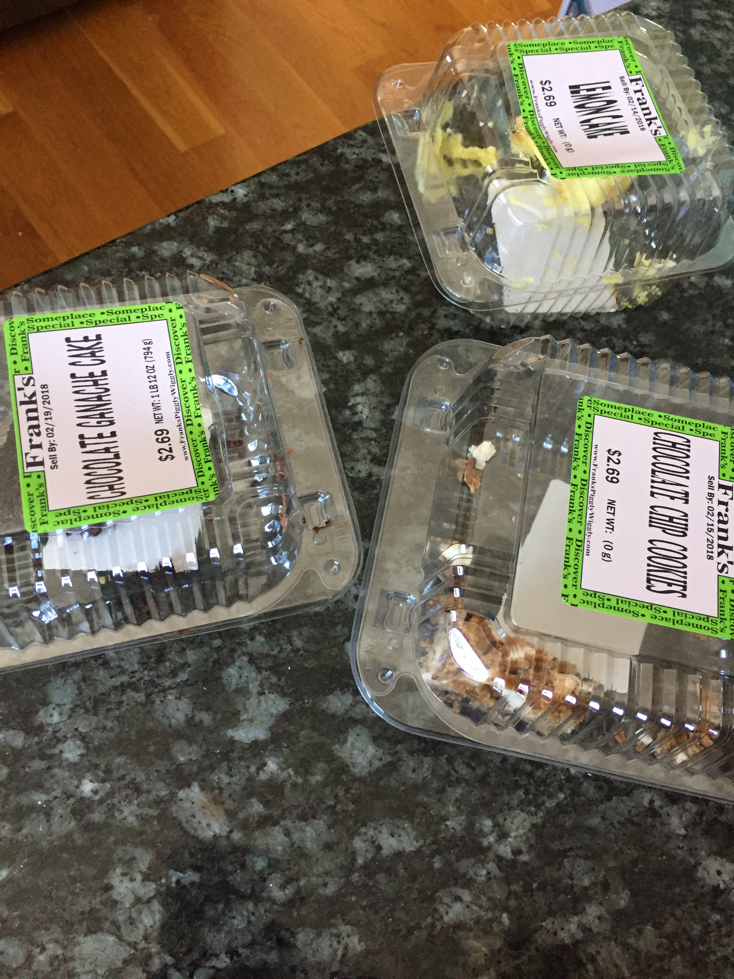 So, today is Monday. It’s sunny and shiny and bright and all sorts of other things. I’m starting the day by acknowledging what I did this weekend for almost six hours straight yesterday, and far more than that on Saturday. A few minutes ago I chugged 12 ounces of water. In about nine minutes I plan on drinking another 20 and then getting in a good workout. I’m going to go home and start some white chicken chili in the slow cooker so that I have a hearty, fan-fave meal waiting for us at dinner time so that we don’t end up fending for ourselves and eating “whatever” for dinner. 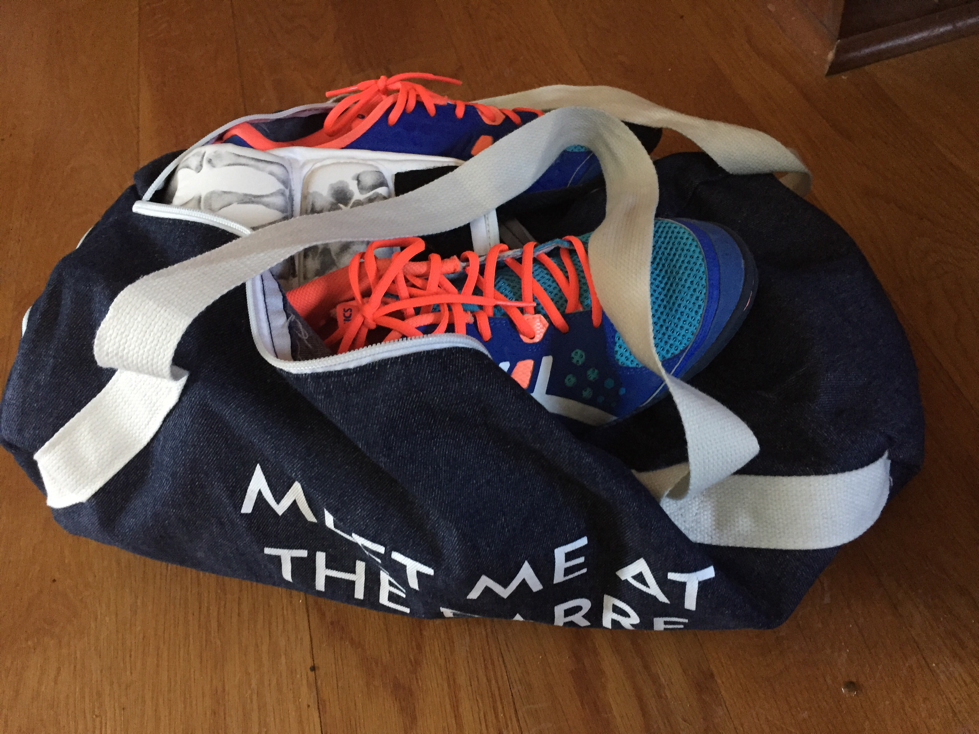 And I’m posting this now because I want to be held accountable. I want people to give me a shoulder bump this week and asked me what’s up. I want people to raise their eyebrows at me at the gym. You see me slacking, hand me the heavier dumbbells. It is shiny and bright Monday and I refuse to go back into that gloomy gutter of the weekend. 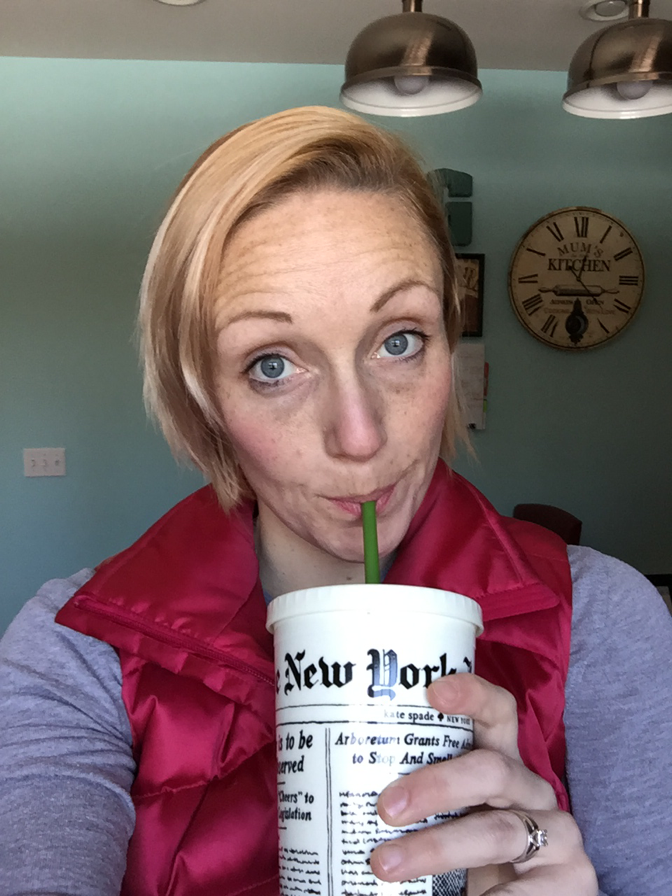 Just keeping it real and drinking my water, because nobody gets anywhere from patting themselves on the back with a pocketful of lies.
That crap made no sense.
I need a shower.
Posted by Buffy at 7:02 AM No comments:

Boobs in a pinch? This can help - ANOTHER GIVEAWAY! 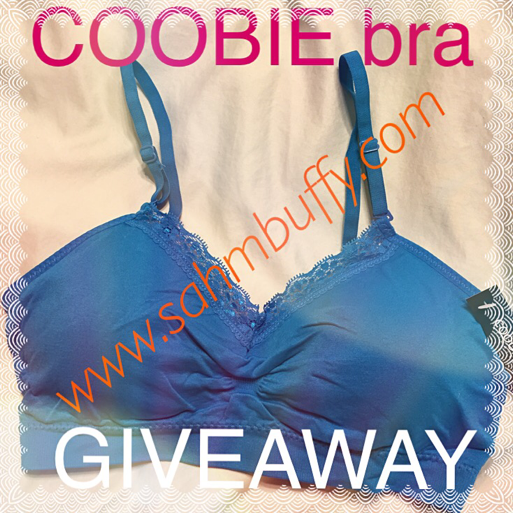 A while back, I got the opportunity to test out a bra. Note a giant eye-roll because I’m a mom and if the bra says ‘comfortable, attractive support’, you’d better believe my 32DDs are going to call shenanigans. If it’s comfortable, it’s not supportive. If it’s attractive, it’s not comfortable.

You get the idea.

So Coobie sends me a brassiere and I’m definitely side-eyeing their nonsense, but I figure it’s worth a shot. 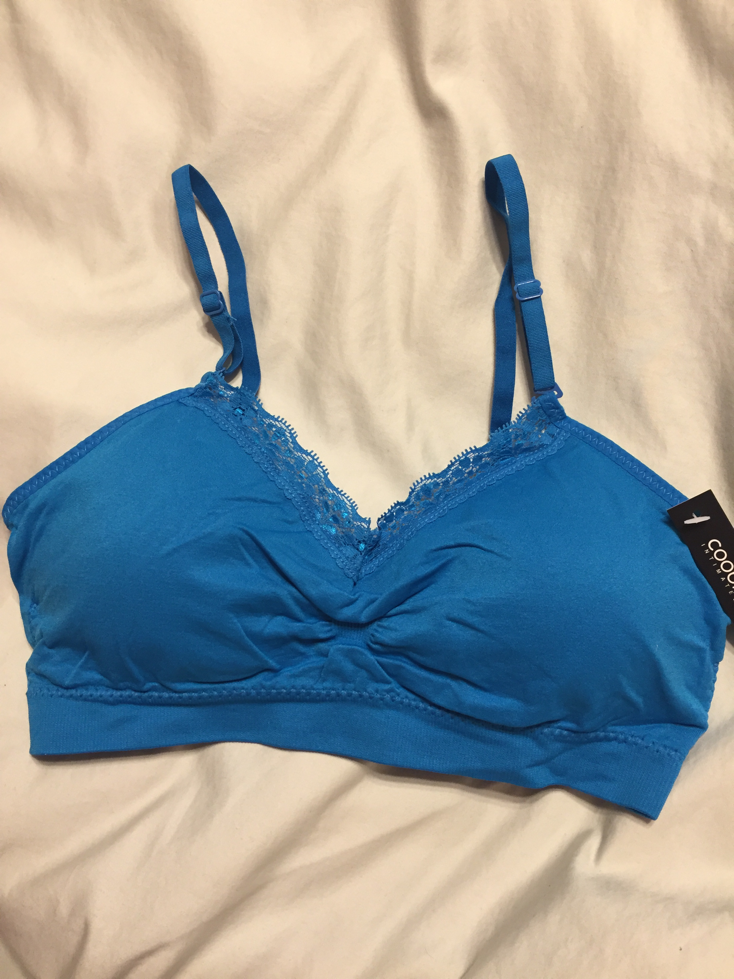 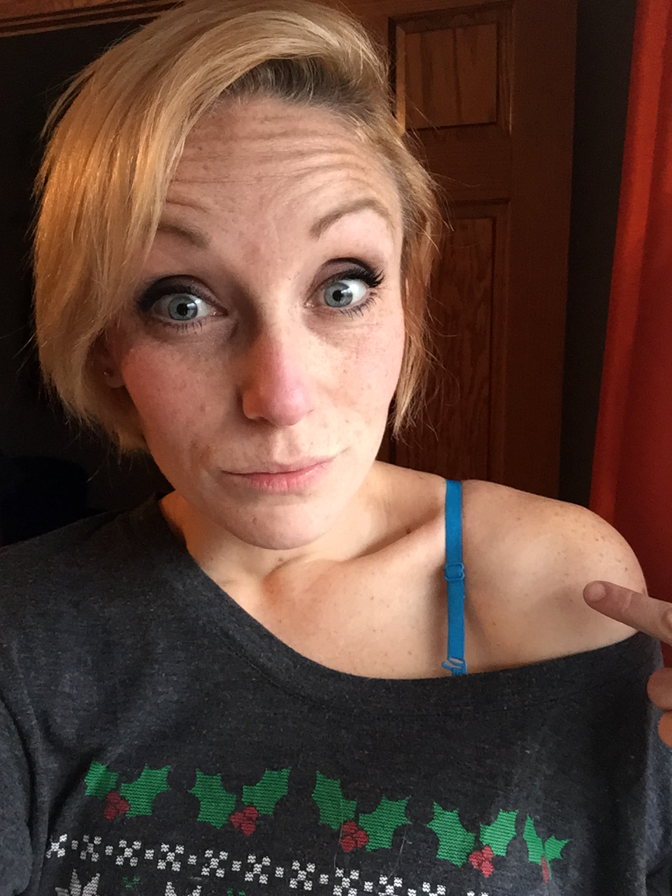 If you have, I’m wearing my Coobie lace-trimmed v-neck. Ya know, like below, only less long haired brunettey. 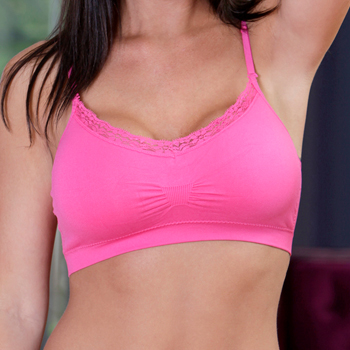 So what’s kind of awesome, the straps have those little hook things so you can make them X in the back. This is a total winner-winner chicken dinner for racer back tops or if you really need to hoist the girls up. 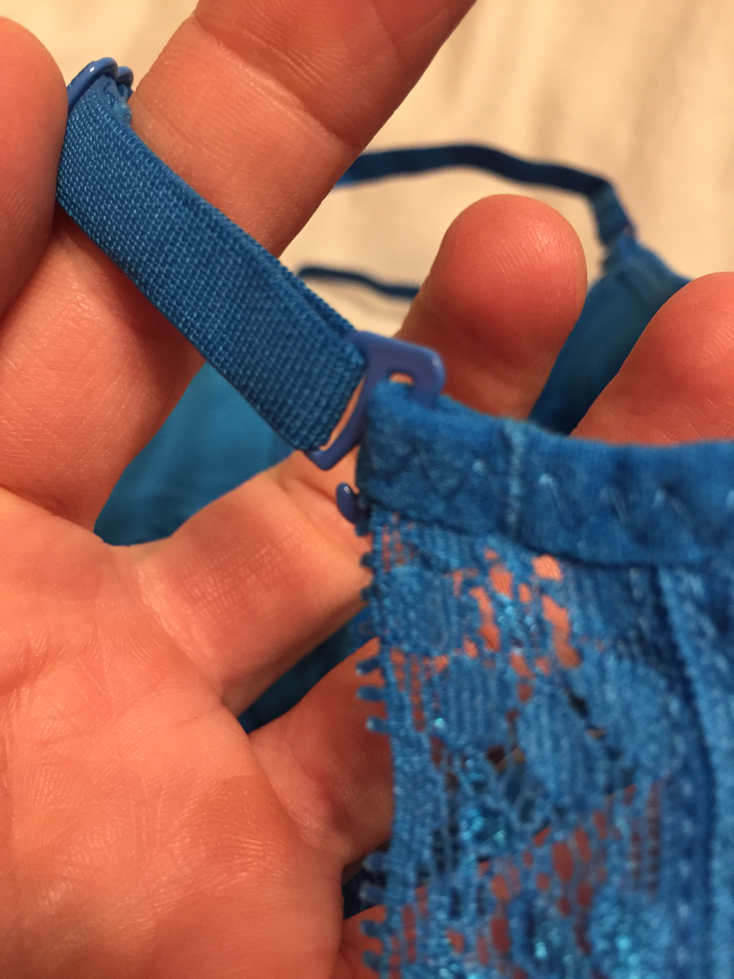 This style is NOT the most supportive for my shape. I wouldn’t run a marathon in this particular getup (nor would I be running a marathon to begin with) because I would definitely be finishing with a black eye or two, and probably a disclocated kneecap or something. But the Coobie Seamless Bras are ultra comfortable and supportive. One size fits 32A-36D and Full fits 38A-42D, but even us bustier DD+ gals can find one that works for our twins. No, really! No side boob or anything! 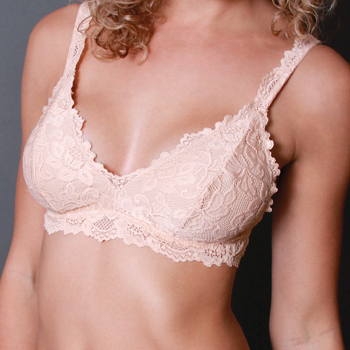 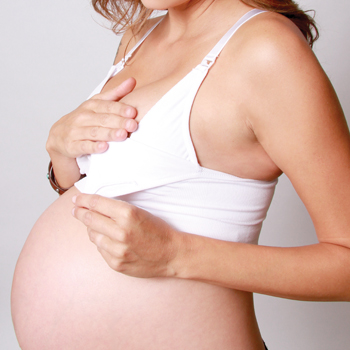 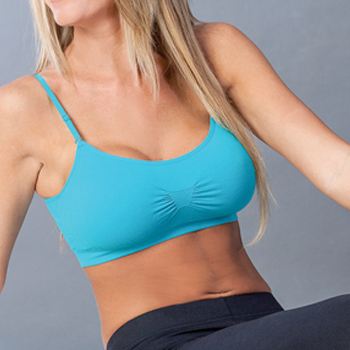 Wanna try it for yourself? Or attempt to win one to give to a loved one, or maybe even someone you forgot to buy a birthday present for?

Okay, seriously. You do.

I’m giving away TWO of them! (Insert Maui singing, “You’re Welcome” here. Use the gizmo below and share share share for more amazeballs giveaways super soon!

Oh and hey, if anyone wants to get me something, I'll take one of these in bright pink, pretty please. 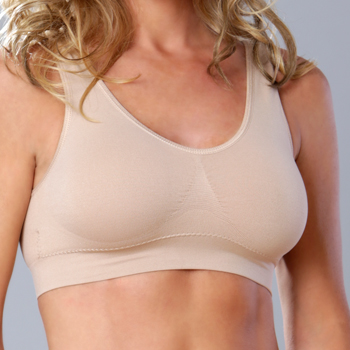 Hey, and while you flip through and potentially enter to win this outstandingly amazing and generous giveaway from Coobie, head over to www.shopcoobie.com and use code USFG to get 30% off your purchase! HOLLA! 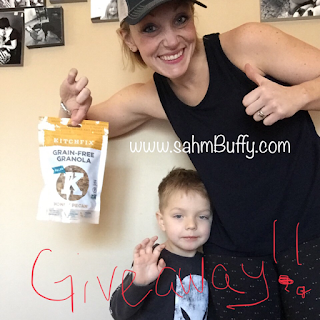 HI FRIEND! It's time to celebrate.
I woke up last weekend feeling like microwaved asshole, and it was a spiral downward really quick. I know, I know. 934 people would have helped with the rottens over the weekend as my husband was adios for a trade show, but I didn't want to show weakness. Because, ya know, being a physically and emotionally unavailable mom a floor away from my young offspring was WAY better. I think the peak of horrible was when my kids would fight from downstairs, and I would muster all my energy to croak at them to stop fighting before breaking into sobs. I wasn't sad. I was just that farking weak. 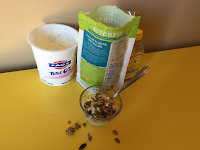 I think the real butt punch was just prior, I hit a weight goal AND I moved out of size large to size medium running pants from Gap (my fave gym clothes ever, in case anyone ever wants to get me a gift card wink wink nudge nudge because a certain human female maybeeee just bought a ridiculous number of pants on clearance not that long ago and now they keep falling off despite the internal drawstring. Dammit). Honestly - the light bulb moment for me was eating, ya know, less. Not a ton less. Not depriving myself. Not only eating air or only eating a strict diet of animal lard and sunshine, but... just less. Like, less calories. Ya know, science.  Smaller servings. And crazy, eating fruits and vegetables and lean proteins actually fill you up. AKA, everything we've ever been told by healthy people but like to ignore.

Today has been all about getting back to it. Back to the gym, back to getting a (note: VERY) few things done around the house, back to writing. I would have done a few of these fun things yesterday, but it was the Moose's 4th birthday! I can't believe guy is 4.
I know.

I'm a bit basic. Whatever.

ANYWAY! Back to the food. New discovery alert! Coming in at 170 calories per 28 filling grams, 14 grams of fat and 8 grams net carbs with 5 grams of protein, meet Kitchfix Grain-Free Granola. It's my new personal Tabasco - I put this shit on everything. It's Paleo. It's 'clean'. It's Keto-compatible. It's normal-person-like-me YUMMY. 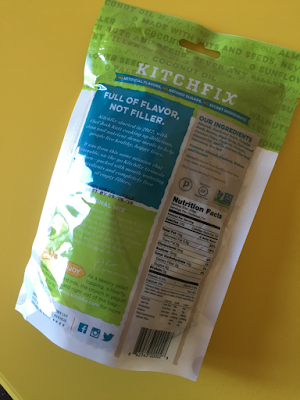 So kiddos, while you're getting familiar with the OG grain-free granola, you should take a moment to introduce yo'self to Kitchfix Honey Pecan Grain-Free Granola. Ya know, basically a yummy remix of an already yummy thing. 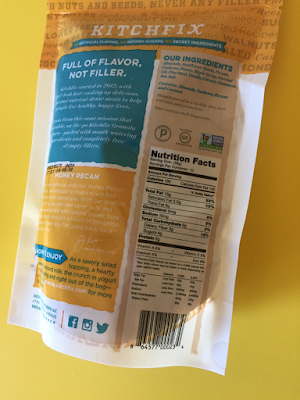 FOR TOMMY'S BIRTHDAY! We're (JK. I'm doing this. He's a jerk who has never willingly given anything to anyone, ever, minus pooping in his pants for the first time in several months earlier today **just for me**) giving away a bag of the Honey Pecan Grain-Free Granola! To enter, go below to the Rafflecopter widget below and do your thing. Once you've liked my Facebook page, just type out 'done' and submit. Woot! 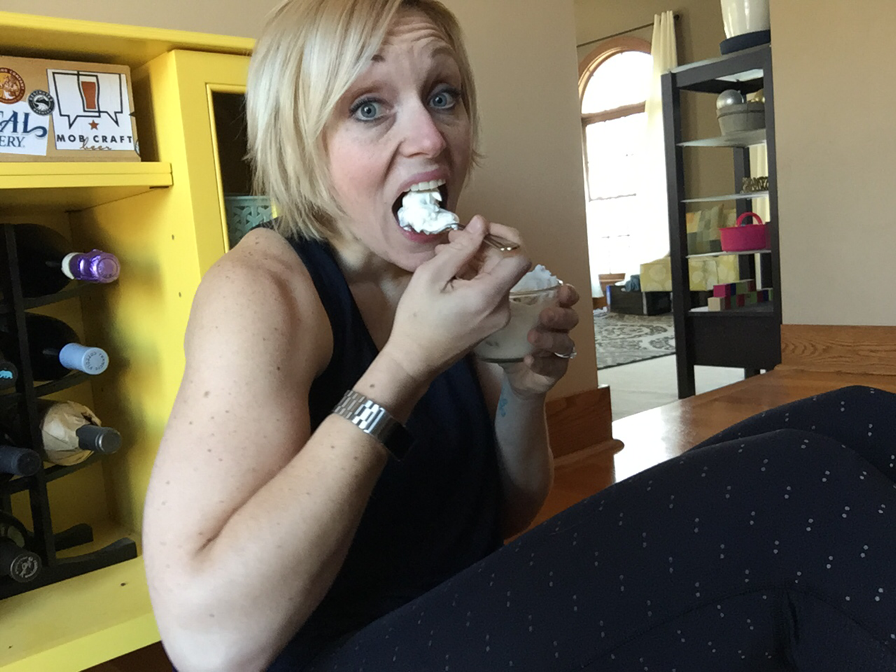 Now excuse me while I quite literally hide behind the dining room table on the floor to hurry and eat this. Kid wants (and WILL STEAL) anything I have. Ever. And then he won't like it even if he did yesterday, and then he will spit it back into the bowl, and then I will sob and open one or two or seven of those pretty bottles behind me and then that will not be conducive to me feeling better from this stupid ass illness.

Shit.
The kid JUST found me eating. No joke.