Huh. It seems I went MIA for a little while there. I blame the weather, the season, the toddler, life in general. Things have been good though. Better than good! My midwife prescribed me a low dose of Zoloft which has made a tremendous difference in pretty much everything that I haven't been able to deal with on my own. I'm resting a bit better, far less mood swings (although when my husband jokingly said I was huge tonight... cue the dramatic tears), more ambition over all. So, it's pretty much doing what it's supposed to be doing. I was admittedly nervous about going on an antidepressant, especially while pregnant. It seems so hush hush and taboo and grave but I'm definitely happy I took the leap.

As for the pregnancy, it's a boy! Did I post that here yet? No? It is. I saw the little guy's junk and everything. Fingers, toes, a couple eyeballs... all in all, it's definitely a baby in there.
And I have a 24 week pregnant beer belly, that's for sure. The kid is ridiculously active (as I type this, I feel like he's trying to escape somewhere between my belly button and boobs. Sorry, child, that's not an exit). His favorite thing is to start swinging away when either E has her head in my lap during one of those rare moments she snuggles with me, or when I'm holding someone else's kid. Apparently that really gets him boiling. Obviously then I insist on holding ALL THE BABIES!!1!
Halloween happened, which was pretty awesome. Actually, it wasn't. We had a few rough weeks of colds and sinus infections that we are mostly over now, but that pretty much equated to a costume party ending with tears, a single trick or treat outing with friends and several cancellations on friends and family for their respective parties.  We're on the upswing though, and despite a snotty face E still turned out pretty cute in her three (count 'em, 3!) costumes. 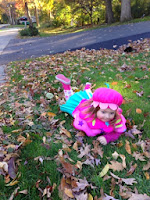 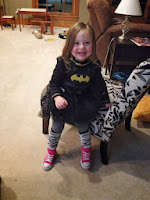 Finally, a recipe recommendation. I made the mysterious and elusive Italian Wonderpot tonight, originally inspired by a Martha Stewart recipe idea. HIGHLY recommend, my only alteration was to add a few splashes of balsamic vinegar to my bowl. It made a world of difference to the flavor. 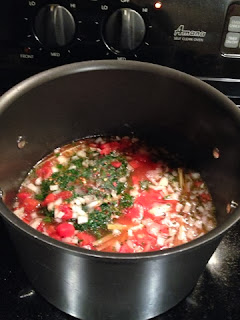