Fireworks and Halloween and Weight Loss and Life

I haven't written since June. JUNE. Seriously?! Absurd. It's October.
Quick update - Kids are good. Well, they were good. As of a few minutes ago Tommy has a bitchin' fever and Emma is post-school whiny. I'm trying to decide between obligatory naps for the fournager or a giant mimosa and/or screwdriver for myself.

Ugh.
Only, calories. I'm counting calories like a fool along with the husband, and getting great results. He's been a rockstar on the weight loss game. He's walking on the treadmill every night for an hour to 90 minutes, counting the cals, tracking his protein, reducing his carbs - seriously, it's inspiring. I'm playing along too with the calories and the workouts but I'm really focusing on strength. Mama wants guns, folks! Since we started this madness I'm down about 5 pounds but I'm mega down on inches, and my muscles are starting to pop!

Halloween is rapidly approaching, so I'm making Emma's costume from scratch this year. Of course, only my kid would want some obscure cartoon character that no costume exists for. So I say scratch because no pattern, no direction, no blog to follow along with. I'm making it up as I go, and it's turning out pretty awesome.
Tommy, meanwhile... poor kid. He's getting one of those nylon-blend, over-the-sweatpants costumes that will be pilling by the end of the night. Sucks to be the second kid, eh?

His speech is exploding, and he's in full toddler tantrum mode. He goes from 0 to 1000 in 2 seconds of indirectly asking for something. Or if I take something away from him? (For example: a butcher knife)... Holy crap. Que the fireworks. 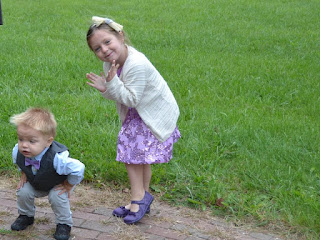