Recovery day 3: The Zombie Strikes Back

So it's Saturday, post op day three. My in-laws took the kids for couple hours today which was pretty much the biggest blessing I've ever experienced. Brett was just about two minutes away from choking them. You know, envision Homer and Bart Simpson with the eyeballs popping out, etc.  Me thinks dude isn't cut out to be a stay-at-home dad.
Today has actually been kind of rough. I was doing good, and then I got really groggy without even taking any medicine. I rested for a while, I woke up and went
outside for a few minutes. Not too long after I got back in the room my stomach started burning. A few minutes after  I was vomiting. Super sexy, I know. No fever, no other symptoms other than slight lightheadedness and a burning stomach. I guess I might as well just lay around then. (Which is hilarious because WTF else would I do right now?!) Note that zombie knee itself isn't all that bad. My foot looks very Fred Flinstone-esque, but my is golden.
Boredom is making me shop online. I have bought more shit in the last 24 hours then I think I have in the last six months. The worst part? I still don't have a damn thing for Brett's birthday which is the 24th. If anyone has any grand ideas pretty please forward them to me ASAP. Chances are he already has whatever you pick out or he really doesn't want it. Hence my frustration.  Dude is kind of a jerk sometimes. But bless his heart, he's my jerk. 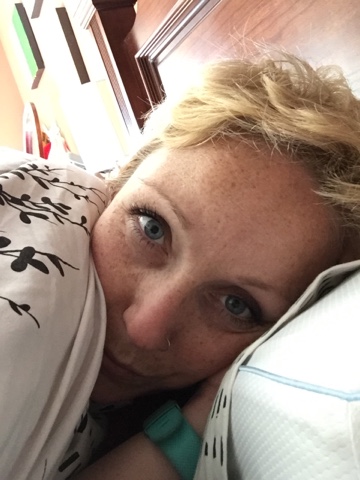 Oh! I got a shower today! Or, well really, it was a sitting in a lawnchair spray down. Can't get the incision wet. Pffffft! At least I smell slightly less disgusting in my hair is a slightly less greasy mop. Score!
For those of you keeping score at home, I still haven't pooped. You are welcome. 😘😘😘
Posted by Buffy at 2:06 PM